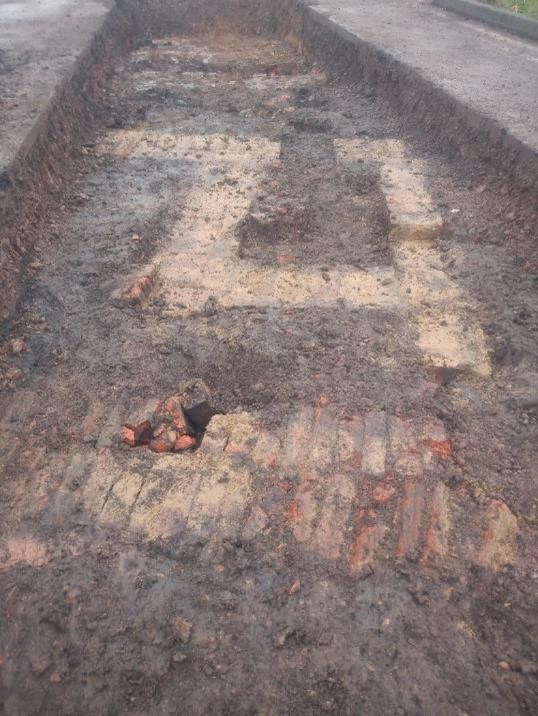 Excavations at Abbey Street in Nuneaton have shown the site has been occupied for hundreds of years with artefacts dating from the 18th century unearthed.

The work is part of the extensive Transforming Nuneaton programme which will see the current site occupied by a hotel, leisure buildings, food hall, college facility and a multi-storey car park.

The site of the trenches was occupied by buildings and related plots that fronted the south side of Abbey Street, and had the potential to contain remains of archaeological significance relating to the medieval and later periods of Nuneaton.

A spokesman for Headland Archaeology said:

“Archaeological remains were found to survive relatively frequently, generally in the form of shallow wall footings and occasional negative features, present at the interface between natural geology and the overlying made ground overburden.

“In trench three there were indications of a thicker archaeological horizon, comprising the remnants of former soils surviving in a deeper part of the trench in areas undisturbed by cellaring.

“Spot dates from pottery recovered from trenches one and three indicate a late 18th/early 19th century date which is consistent with the presence of structures shown on first edition Ordnance Survey mapping.

“There is a background of low level prehistoric and Romano-British activity in the general environs of the site, but no specific known potential, an Anglo-Saxon settlement was established by the ninth century but there is little recorded evidence of archaeological remains from this period.’’

Abbey Street is thought to have formed a route connecting medieval settlement in Nuneaton to the Benedictine Priory of St Mary to the north-west of the site, potentially with ribbon settlement running along its course with the core of the main settlement is likely to have lain to the south-east of the evaluation area, around Market Place.

Post-medieval expansion of Nuneaton occurred primarily around the earlier street system and the buildings and property boundaries shown on the 1888 Ordnance Survey map are likely to be reflective of plot divisions from the medieval or later periods.

The town centre was heavily redeveloped from 1947 into the 1960s, resulting in the demolition and clearance of the car park area of the site, including the 19th century gas works in the south of this area.

“Every piece of evidence contributes to Nuneaton’s story as we build the next generation of buildings that will make up the town centre, it is good to learn a little more about past uses of this site.’’